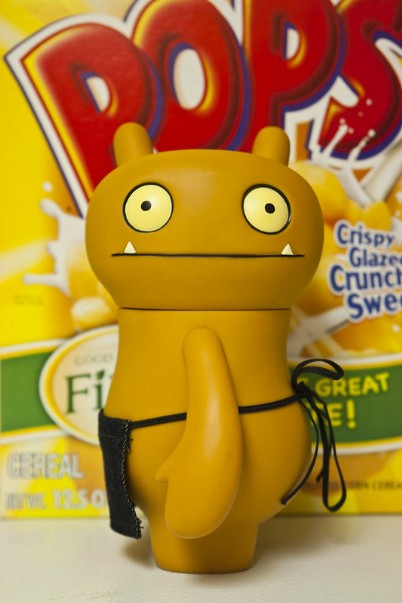 Last night when I returned back to the hotel room I could hear Wage was still in his zombie-like trance and was smashing the room up good and proper, so I decided that it was time to use the Bat-Phone, or should that be the Babo-Phone.

Thankfully Babo didn't mind too much about being woken up in the middle of the night back in Aachen, thankfully he managed to answer it on the first ring and thus prevent the noise waking Mireille up (as then there WOULD be hell to pay).

After I had explained the situation to Babo he took a second or two to think about how I could proceed and then in his normal awe-inspiring logical way he replied, "Okays, this is a strange phenomenons that I has never seens before personallies, buts from whats I understands as the infected persons is acting likes a derangeds killer then we has only one options - the counter-agents to the madnesses, Corn Pops, they is the best "Cereal Killer" of them alls".

I thanked Babo for his awesome help (as always) and asked him to cuddle into Mireille for me before hanging up the phone.  I then quickly drove to the local supermarket to acquire some Corn Pops to test out Babo's theory.

Upon returned to the room the noise of demolition coming from inside was beginning to disturb the guests in the nearby rooms, and they looked at me strangely as I opened the door just enough and threw the box of Corn Pops inside.  After around 10 minutes the noise died away to silence and I slowly slid myself in through the door to find Wage completely normal standing beside the box of cereal.

"Hi Baz, fancies some cereals?", he asked upon hearing my footsteps...panic over, and yes I did sit down and have a bowl of cereal with the little guy who had no recollection at all of the events which had transpired.