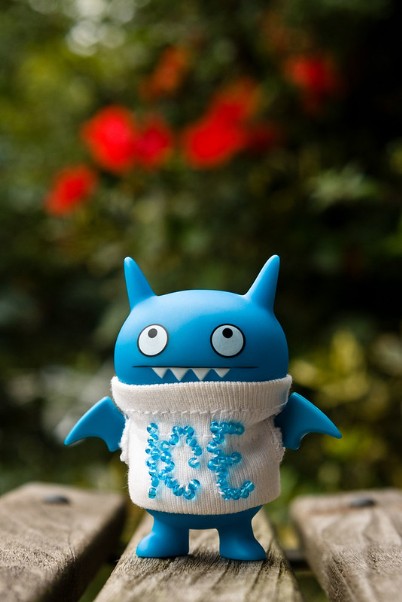 Almost as soon as the word "snow" had came out of the weather forecasters mouth this morning on TV, Ice-Bat had quickly put on his favourite "ICE" jumper and ran outside.

After around 20 minutes had passed I noticed he hadn't moved at all and was standing perfectly still looking up towards the sky, so I decided to throw on a jumper too and head outside and havea chat with him.

I asked him what he was doing outside, to which he replied, "As soon as i heared that snow is due soons I thought I had betters go watches for it!".  I unfortunately had to tell him that if he had listened to the entire forecast he would already know that the snow is forecast for this coming Saturday and not today.

"That's a pitys, I had thoughts that we could makes a snowman this afternoons too, I guesses we just has to waits until the weekends now", he said as he rather dejectedly walked back into the house.

Icy says he's not going to take his ICE jumper off though, as that could prove to be bad luck and prevent the snow from coming at the weekend!