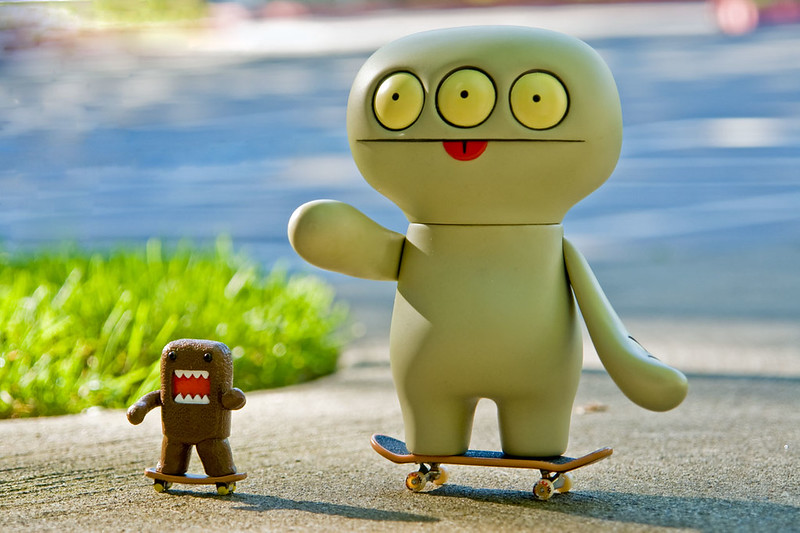 Since DJ Domo arrived on the scene to take care of the record decks at the "Cat Catcher Fundraiser" Cinko has been making the most of having the little guy around.

First off I suppose I should explain that Domo suffers from a severe case of ADD (attention deficit disorder), and due to this the only thing that seems to keep him sain is to constantly be up to some kind of stunt or another.  For instance when you wake up to the sound of a bath being run at 3am in the morning you would normally get a shock, but not when cousin Domo is around as he's probably practising his octo-dives (which consist of 8 forward or backwards spins between the shower curtain rail and the surface of the water.

Domo was even explaining to the other guys about his crazy plan to try and jump the Grand Canyon on a skateboard in the next couple of years, and as you can imagine this got Cinko's attention and after some web searches he found some videos on youtube of the old daredevil Evil Knevil doing some of his most crazy and lairy stunts.

I'm not saying for a second that Cinko is becoming a daredevil too, but the thrill of watching those videos and hearing Domo talk about his meticulous training on his skateboard got the attention of everyone's favourite three-eyed dude.  He asked me if he could have a skateboard of his own, and I took him shopping for it once he promised me that (1) he'd stay on the sidewalks (pavements to us europeans), and (2) that he would always listen to the advice and teachings of Domo (who is somewhat of a connoisseur in the skateboard world).

It's definitely keeping him and the others entertained (the rest seem to enjoy it more when he falls off and the skateboard goes whizzing off into the grass or under a hedge), but thankfully Cinko just stands back up, dusts himself off and tries again.

In his own words, "Perfects means lots of practices, and only when you knows how hards you can falls does you learn to not falls!".

Never have I heard a truer sentence from young Cinko.