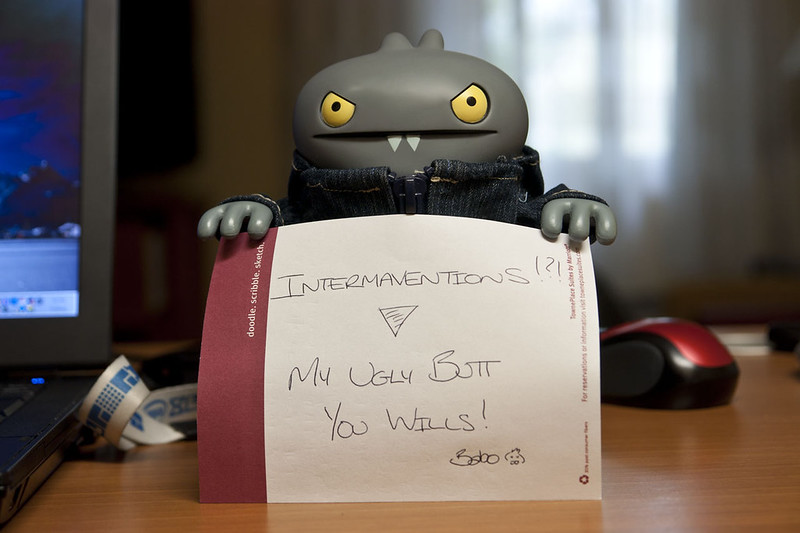 I has to interrupters the regularlies programmers to brings you an importants messager from my sponsorers:-

"My ugly butts you wills!"

Sometimers I thinks you lots is crazies, not justs a little bits either, so fars some of you is so fars down the rabbiter hole that you could probablies poppers your heads out of the others side of the world, and thats fars away incase you doesn't understands that!

Maaaaaaan, ehhhhh!  How cans you even suggesters the notioner that Baz needers an uglies intermavention, he and Mireille is probablies the besterest uglies fosterer parents thats any of us uglies could wishes for, and you wanters him to calls a stopper to it.

Lets me spells it fors you, "M-E-N-T-A-L-L-E-R-S", yuppers, if you thinkers he deservers an intermavention then you is being strikered offs my christmassers card lists this year, I kidders you not, if I gets to works for Santa agains this year you will finds a differents kind of chocolater surprise in your smellies socks which you hangs up expectering some goodies, oh yes you wills!

I bets you didn't knows that Baz has a coolers phrase, "Savers the uglies, savers the world".  Some crazies TV show abouts peoples pretendering they has specialer powers even trieds to steals it and changes uglies to Cheerleaders, ha ha, as if you can even compares someone likes me to a pompom wavings lunaticer!

Enoughs ranting, I is goings to get some cookies and enjoyers a nice evenings with Baz just to annoys you alls even mores, intermaventions indeeds, I says poosticks to peoples who thinkers this...gets your heads checkered immediatelies, or I comes and checkers it fors you, withs boths of my foots!