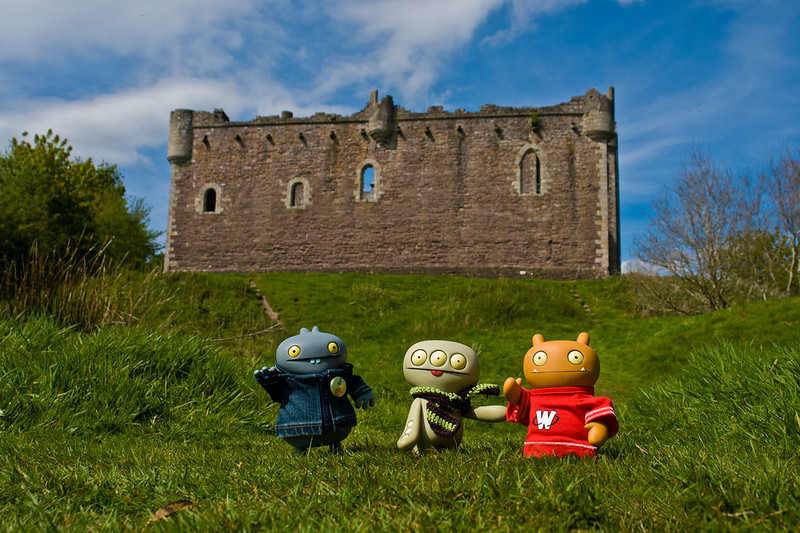 Wage: (as an unknown ugly next to him is squashed by a flying sheep) uglies! Run away!

[Midst echoing shouts of 'run away' the Uglies retreat to cover with the odd cow or goose landing nearby. The Uglies crouch down under cover.]

Wage: (restraining Babo from going out and having a go) No!

Cinko: I has a plans sir!

[Cut back TO battlements of castle. Monkey sentries suspiciously peering towards the Ugly lines in the distance. Wind whistles.]

[Shot of the empty scrubland or undergrowth or woodland around the castle. Emptiness. Wind. More shots of the Monkey sentries peering into the dusk. As night falls. MIX THROUGH TO night On the battlements a brazier burns or torches on the wall as the sentries peer into the dark. Shots of the woodland with fires burning where the Ugly lines are.]

[During all this the sounds of extensive carpentry have possibly been heard, followed by silence, followed by renewed outbursts of activity.]

[CLOSE-UP of Monkeys looking very nervous. Dawn breaking. Shot of woodland. Nothing. Wind. Dawn still breaking. Shots of the Monkeys. They suddenly hear something. A faintly detectable squeaking which is getting louder.]

[CUT TO WIDE SHOT of castle and woodland. Squeaking getting louder. Shot of a Monkey sentry pointing. WIDE SHOT again. The squeaking gets louder an enormous twenty-foot-high wooden banana is wheeled out of the undergrowth into the open space in front of the castle. The Uglies scuttle back into the undergrowth. The banana has a large red bow tied round it and a rather crudely written label, which reads 'A presenter for the nicers monkeys'. The chief monkey looks at it, narrowing his eyes. Then he turns and leaves the battlements.]

[CUT TO Wage and the others watching from the bushes. The main gate of the castle opens a little and the chief monkeys head sticks out, then another Monkey head, then another. They mutter to each other in Monkeynese, look rather pleased, then rush out and start to pull the giant banana in.]

[CUT BACK TO WAGE and the others behind some bushes watching.]