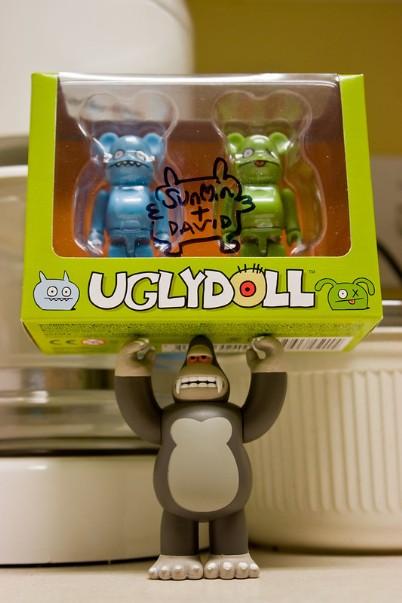 Most of the people who visit my stream for a daily dose of Uglydoll madness will already know that it all stemmed from me randomly finding photo's of Wage's adventures on photo david's photostream.

That cheeky little smile combined with his crazy adventures had me hooked right from the start and both myself and Mireille would send each other the links back and forth to some of his funniest moments.

Anyway, back to present day - a MASSIVE thank you to David for helping me out with acquiring the all new Ice-Bat Vs Ox bearbrick figures which were released at the comic con in San Diego a week or so ago and then shipping them up to the hotel I'm staying at.  Not only that, but the box is signed too, now that's PROPER UGLY to the highest possible level!

Not only does he take some of the best (if not THE best) ugly pictures on Flickr, but he's a really top bloke on top of all that - from myself and Mireille a massive thanks for helping us out David, it's very, very much appreciated.

To show our appreciation, King Ken decided to jump on a plane over from the UK to hold the autographed box above his head (some kind of strength show in monkey world it would appear) as long as he was back before Simon wakes up in the morning oblivious to Ken's transatlantic travels.