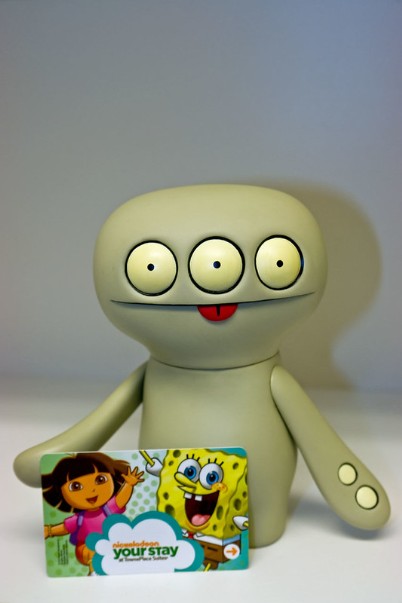 Cinko had been on at me for the last few days that he couldn't find his passcard for the hotel room's security reader, so I had left him my spare one so that he could get in and out while I was out at work.

Today when I returned home he proudly said, "Checks outs my new passcard!".  At first I thought he had just picked up some kind of funny card from somewhere and was pretending that it was his new hotel passcard but he quickly dissolved those thoughts with the rest of his story of what had transpired.

"Todays I went to the receptions area for breakfasts stuff, and the womans on reception was speakings to me about what all we does, and I tells her that I loose my card.  She asks me if I wanteds a cool card just for me, so of course I says yes, and looks here it is, it has Spongebobs and Dora the Explorers on it!".

He's quite the celebrity around the hotel now as all the other guests are wondering if they too can get one of the cool spongebob cards just like Cinko.