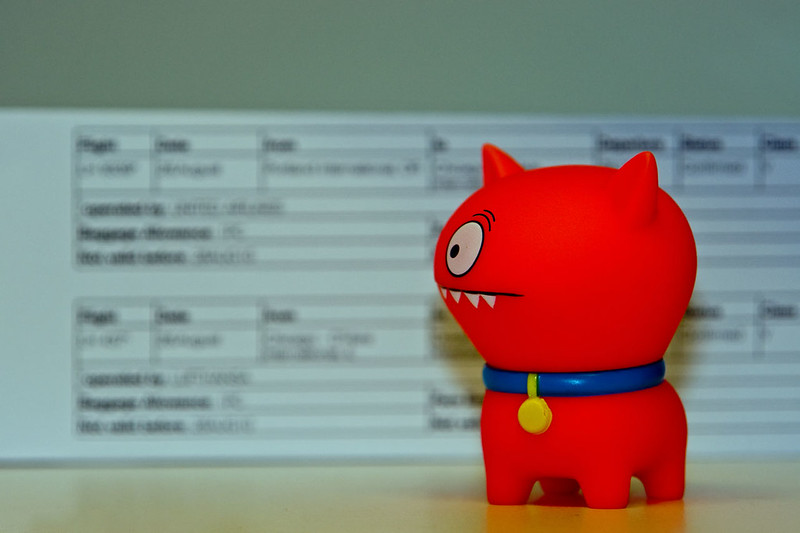 I'm not sure what triggered Ralf off this morning, maybe it was the fact that by complete chance the number of my "Adventures in Uglyworld" picture from yesterday was #747.

Whatever got his mind ticking over resulting in him digging through my laptop bag to find the paperwork containing our flight details, at which point all hell broke loose as he barked and barked until the entire hotel must have been awake (which isn't necessarily a good thing when it's early on a Sunday morning when it happens).

The little guys all went into a "teams huddle" as they like to call it, I've long since learned that when they do this they REALLY don't want me to be listening in to their conversation so I let them continue while watching intently from the bed.

Babo was (as normal) quickly determined to be the spokesperson of the group, and he purposely strode over to the couch, sat down and shouted over to me, "We needs to talks, NOW!".  I wandered over to the couch and sat down beside Babo waiting for whatever had sparked off such a crazy Sunday morning.

"We flied here on the sixteens of julys, corrects?", to which I nodded my head at Babo's first line of interogation. "We was to be heres for 6 weekies, corrects?", as I began nodding my head the realisation of what had caused the madness started to sink in. "Then when my maths skills is goods, which I knows they is, that would means that we would be homes in Aachen this mornings, so why is we still in Oregons?".

Having just found out a couple of days ago that I would need to extend my stay by "at least" another 2 weeks, the madness of my day job and coming back extremely late to the hotel meant that I hadn't spread this news to the rest of the gang, and rightfully so they were now up in arms at this development.

"It's nots like we dont likes it here, but we wants to gets back to Aachens to sees the rest of our families and Mireille especiallies, as she has to makes us new clothes for the winters which comes soons".  All I could do was apologise to the little guys and explained to them that we're currently staying through until September the 11th (I cringed when I saw that date come through for my planned return flight), but that our stay could end up being extended further all depending on how things go with work in the next 2 weeks.

Babo wanted some form of "golden handshakes" for having to go back and explain the reason for their extended stay to the rest of the gang, so I told them that they should consult Turtle as to where they would like to go next weekend (as with the holiday Monday we have the chance to go a little further than we have already while out here).  Babo said that it was the "minimums offer he expecteds" and that I "musts be on your bests behaviours from now ons, or elses there will be troubles".

Needless to say I'm just about to take everyone along to Starbucks for some drinks and cookies.