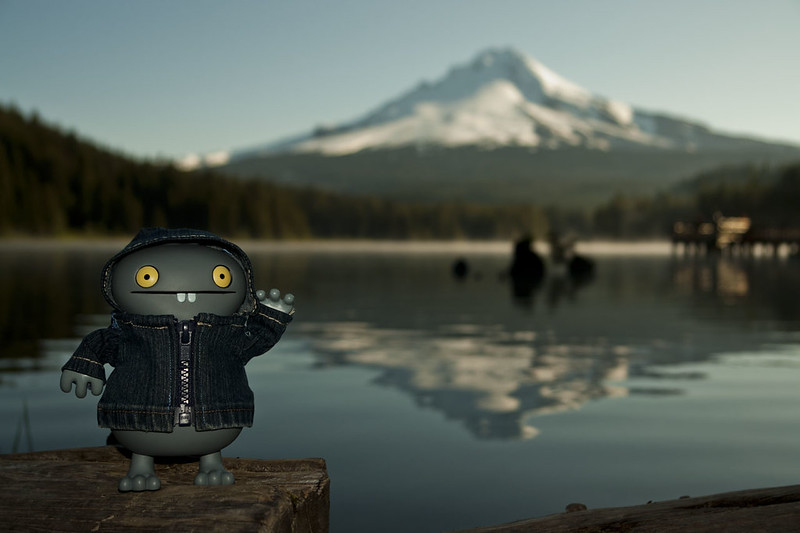 As you knows Baz plannered a super mega awesomer (and secreters) day for us todays, and this mornings at 4.30 in the AM's the alarmer clock starteds shouterings at us to gets up.

At firsts I reckonered it musts have been sets wrong, but when Baz jumpered outs of bed and into the showers I realisered it was setted rights after alls.

As soons as we gettered into the car I could see where our firsts stop of the day was goings to be, a place callered Trillium Lake which is locatered on the Souths sider of Mount Hood, which is a biggers volcano that is covereds in snows. To gets there it takered us arounds an hour and a half, thankfullies Baz is a gooders driver and I feels mega safers in the car withs him, so I catchers some extra snoozies on the ways there.

Baz was a little disappointered that we didn't maker it to the shores of the laker befores sunrise, we missered it by onlies a little bitter.  It was so darkers where I was standings that Baz even hads to user the flasher to makes me out, mentals! Can you sees the awesomers mist that is hoverings over the waters, it makered the lake looks mega spookiers.

I needs to goes and getters my dinners now, as we has been on the goes all day, so afters I has eatered I will gets Baz to helpers me sortering out some cools landscaper photomagraphs from today as wells as me posering at loads of different placers!