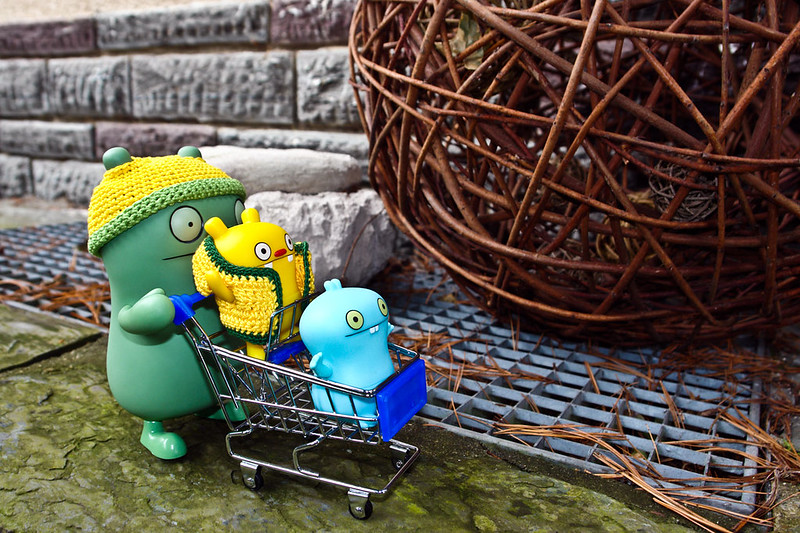 This morning Babo and Jeero had great plans to head outside "having adventures" as they so nicely put it, but when they looked out the window they discovered that it was raining very heavily.  The pair of them were really dissapointed as they had been really looking forward to what they could find, but they know that as they're still small that heavy rain can be really dangerous and that they're not allowed out in such conditions unsupervised.

Big Jeero strangely came to their rescue with a shopping trolley he said he found left on the grass at the bottom of the garden (I'm not quite sure whether I believe him yet about this).  Babo and Jeero jumped into the trolley and big Jeero started pushing them along to cries of "Wooohoooo, we is adventurising" from Babo and Jeero.

After a while the trolley came to an abrupt stop, and all 3 of them stood motionless with looks of shock and awe on their faces as they noticed some strange object in the shape of a sphere.  For a couple of minutes there was no movement and absolute silence from the terrified trio and then Jeero quietly whispered, "Is it a spaceship? I is scared if they takes us all aways with them!".  Babo whispered, "Shhhh, I thinks when we walks past very slowly and quietly they won't notices us".

The trolley slowly moved forward millimetre by millimetre until it finally was past the strange sphere-like object, at which point Jeero quickened his pace with the trolley and it's two passengers.  Once home again they were telling all of the others about the close encounter with aliens, of course when Wage asked them, "Did yous really sees aliens, or just thinks that it could be's aliens?" they realised that it was probably all in their imagination.

Were there really aliens nearby? Is the truth really out there?  I suppose we'll just have to wait and see if the guys are brave enough to visit the sphere again sometime.